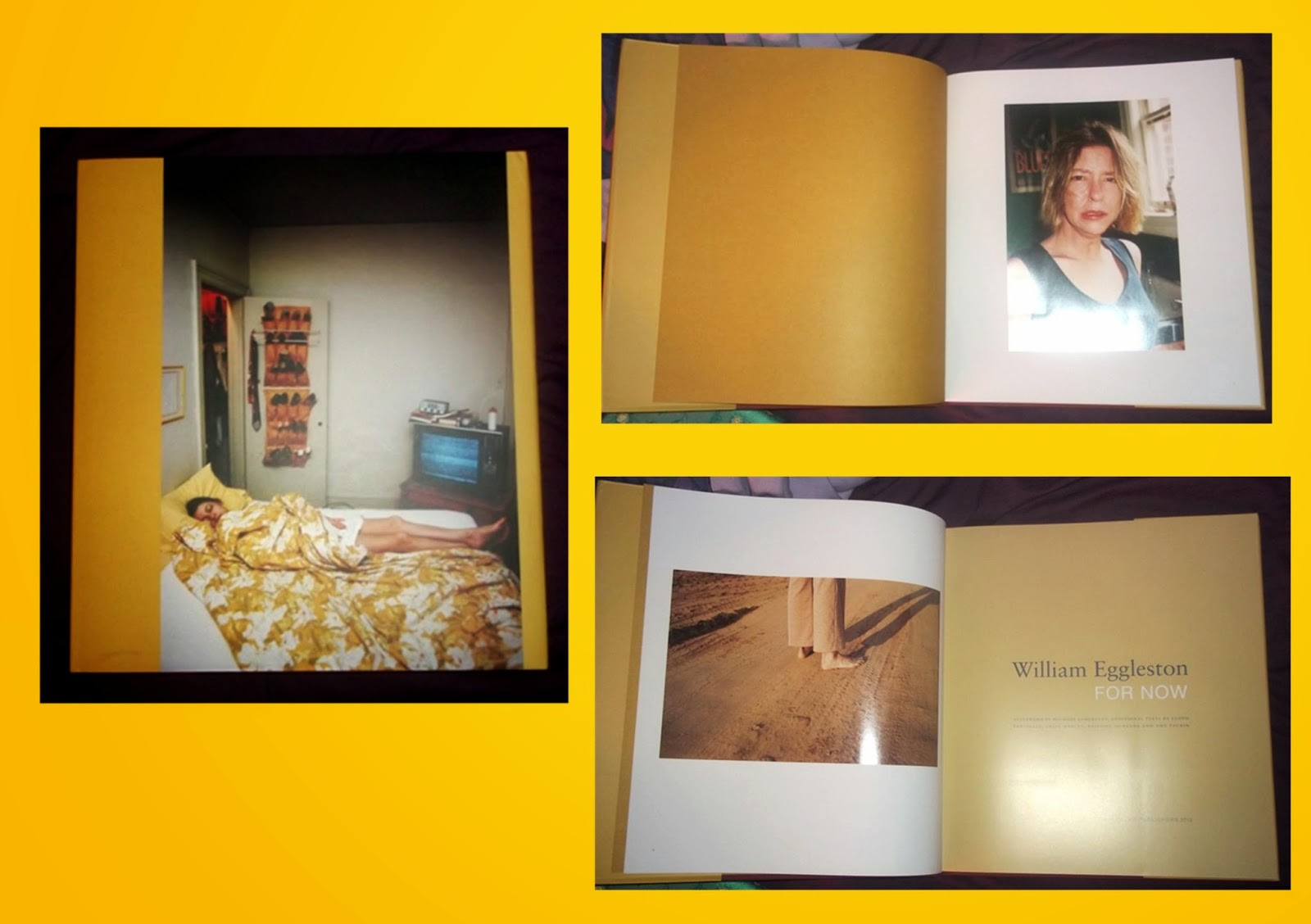 Right now I am looking at the book in a purely visual way. The cover is particularly striking with no text it allows for the image alone to speak of the intimacy contained within with a photograph of his wife in bed. The yellow border matches the yellow colour theme in the image resulting in a beautifully flowing cover that emanates the vibrancy of the American culture and is a precursor to the style of work Eggleston produces in the book. The book is about A3 size square which really captures the details in the photographs.

“the flow of images, the torrential nature of his picture-making process, registers as a sprawling but precise visual diary, a record of things firmly seen or glimpsed and grabbed at, an inventory of experience.”

“the spaces between spaces, the mundane, the makeshift, all the fragmentary raw proofs of civilisation as a perishable human construction that, nevertheless, provides subject matter for vivid and vibrant photographs.” 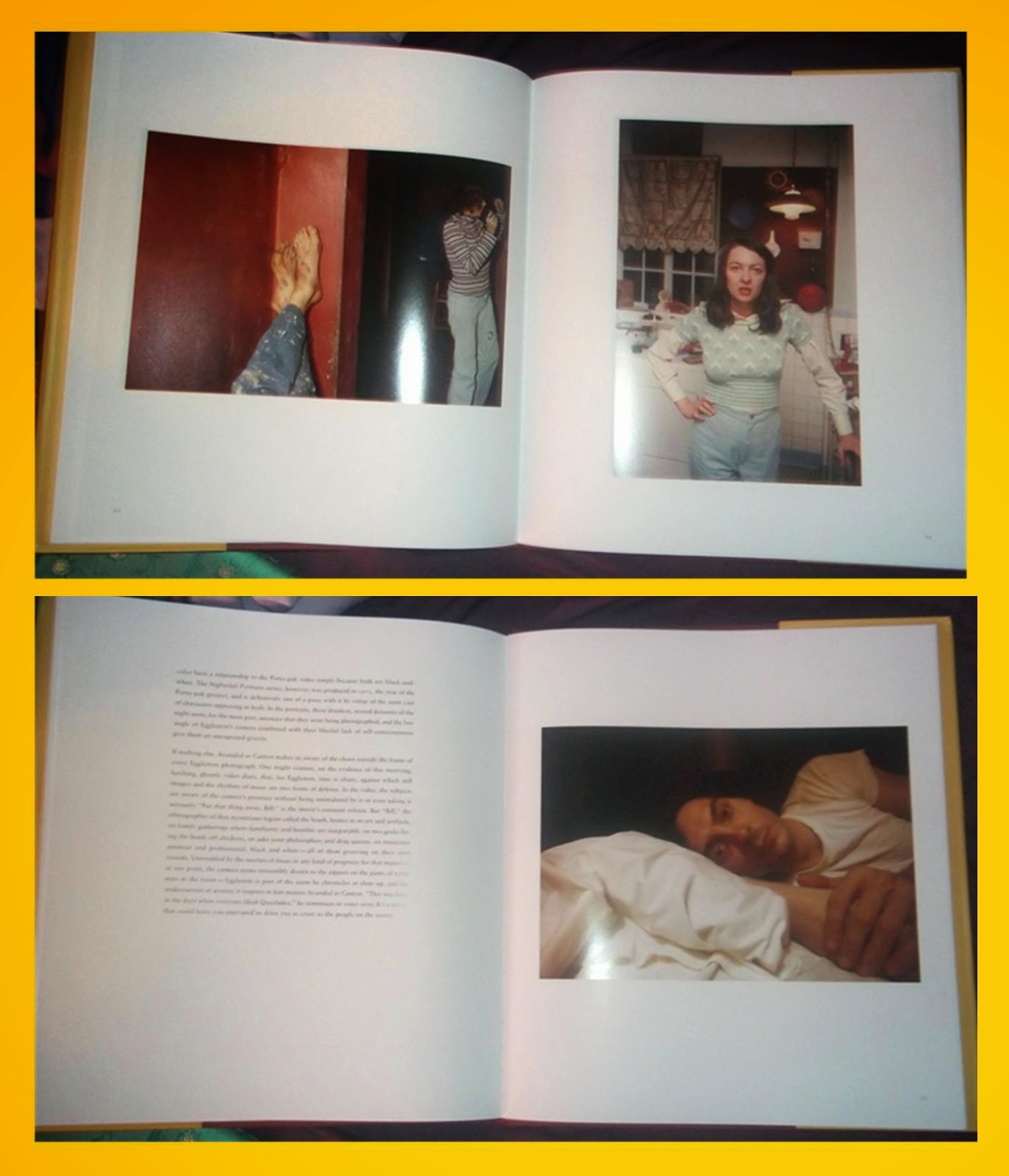 “Eggleston claims that he takes only one picture of one thing”

I like that this process allows for a vast abundance of images that all portray something different, not one is of the same scene. It adds to the spontaneous, fast nature of the images and the pure visual diary of Eggleston’s life. They reflect the human enterprise, the human condition is present in each photograph, he is present in each image, not physically but in an almost ethereal way. The portraits are what draw my attention most, they are raw and connective. The subjects often look directly at the camera and hold a strong emotion. The image above of the woman with her hand on her hip seems to say ‘what the hell are you doing taking a photo of me’ or as if the photographer is in some kind of trouble, a disapproving mother asking her teenage kid ‘what time do you call this then?!’. When you first open the book you are confronted by a photograph of a woman crying, all emotion laid bare in the way she looks at the camera, the dishevelled hair, the tired eyes, the tear stained cheek and the look of a woman just having to get on with it. The truth of the human condition.
The title page of the book continues the yellow colour that was present on the cover and thankfully all the text and essays are left at the end of the book which allows for you to delve straight into the photographs uninhibited by another’s view of what you are seeing.
The last few pages contain various essays by people who know Eggleston and his work on a more personal level alongside an interview with Eggleston himself . In this he speaks about the people in some of the photographs and enjoys the fact that all the photographs in the book are ones that have previously been unpublished. His archive contains over 35,000 images so I imagine there are many he can’t recall offhand. The book contains images personally picked out by the author and contain more portraits then previous Eggleston books and the personal connection to the subjects in the photographs to Eggleston make this book more like a family album than anything else. For me, Eggleston’s work speaks to me in its way of capturing moments that are as close to the truth as photography gets nowadays and his use of colour is beautifully, the way he spreads it out in his images rather than clumping it within one corner of the photograph.

Posted by Sarah Packer at 15:21
Email ThisBlogThis!Share to TwitterShare to FacebookShare to Pinterest