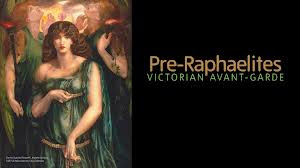 I attended this exhibition 2 days after the Opening Gala for The Signature Art Prize on the 27th September 2012. I had planned to go to this a few months in advance because I am a bit of a PRB (Pre-Raphaelite Brotherhood) fan! I had only seen the wonderful works of Millais, Burne-Jones and Rossetti in books and now was the opportunity to see them in the flesh - and god were they huge!!
I loved the pure aesthetic beauty of some of the work and the poetry and story telling side of it was a huge appeal. What struck me most, was the brilliance of colour in the paintings, midnight blues, rust reds and deep bottle greens, all set against ornate frames. The subject matter focuses on nature, religion, love and poetry by Keats, Dante, Tennyson and Morte De Arthur by Thomas Malory.
The art was seperated into 7 rooms/categories; Origins and Manifesto which included the work of John  Everett Millais and his controversial piece 'Isabella' 1848-9 as well as his beautiful Mariana (1851) which illustrates a poem, of the same name, by Tennyson and her positioning shows what appears to be a sexual yearning which mirrors the lines of the poem displayed on a plaque next to the painting;

Mariana was incredibly beautiful to see up close, the colouring is astounding and the blue of her gown looked like you could reach out and touch it and it would feel like velvet! Obviously one of the well known signature styles of the PRB was their way of painting the colour directly onto a pure white canvas to make the colour vivid and bright - compared to other painters of the time this certainly made the PRB stand out.

Astarte Syriaca (1877) by Dante Gabriel Rossetti, is on the poster advertising the exhibition and it was much larger than I imagined it to be, it was the height of my living room floor to the ceiling! Kind of takes your breath away...

Anyway going back to the seven categories, there was 1. Origins and Manifesto, 2. History, 3. Nature, 4. Salvation, 5. Beauty, 6. Paradise and 7. Mythologies.
They included a number of significant loans, not least Holman Hunt's Lady of Shalott which has not been seen in the UK since the Festival of Britain in 1951 and has been loaned by the oldest museum in the US, the Wadsworth Atheneum in Connecticut.

﻿
﻿ The Nature part wasn't much of an appeal to me as it was mostly landscape covering the work of Ford Madox Brown etc, so I had a quick peruse and then moved on to the next rooms. ﻿The room called Paradise had work by William Morris such as a cabinet he made depicting various women being kind and cruel to animals and also his Peacock and Bird carpet 1885-90.
﻿

There was also a few photographs by Julia Margret Cameron who was influenced by the Pre Raphaelite movement - her positioning and soft focus portrayed romanticism that is a major part of the P-R movement.
The Pre Raphaelites were actually very inspired by photography, especially the detail and the flattening of the image, which can be seen in the paintings of the landscapes and some of the religious paintings.
The image that I fell in love with though had to be Lady Lilith by Dante Gabriel Rossetti, the golden red hair, the busy background, the symbolism within the painting was so alive and relevant. For those of you who don't know the story of Lilith, she was thought to be the first wife of Adam in the Garden of Eden, before Eve appeared on the scene! She was said to be sensuous, sexual, defiant, independent, strong and would easily fit into the label of feminist! But Adam couldn't handle it because he wanted a housewife who did whatever he wanted so she was called a demoness in the Bible and cast out of the Garden.
In this painting you can see the white roses which are said to have turned red when Adam saw Eve (they both blushed), they are white here to represent Lilith herself and her relationship, or lack there of, with Adam. The foxgloves represent perhaps a hint of poison?
The two candles and the garden reflected in the mirror obviously represent the Garden of Eden and the light of God, both of which are ignored by Lilith. Her long hair being brushed is often seen by art historians to represent her sexual desire - a very Freudian interpretation - but nevertheless probably true. She looks in the mirror at her reflection - self obsession, coldness, vanity. The poppy symbolises forgetfulness and lucidity. The chest with a lock implies rules, caged, trapped - how Lilith felt in the Garden of Eden. And finally her loose clothing, ready to fall off if the occassion arises, which it did when she was thrown out of the Garden of Eden and then fell in love with Samael, a fallen archangel.
﻿
﻿ All in all, it was a fantastic exhibition which I would have happily stayed for the whole day looking at! I was in my element and I then raided the giftshop for postcards and magnets! Oh and a book of poetry by Tennyson which I am half way through. I will leave you with a quote by Edward Burne-Jones that I absolutely love:


"I mean by a picture a beautiful dream of something that never was, never will be - in light better than any light that ever shone - in a land no-one can define, or remember, only desire..."
Posted by Sarah Packer at 14:16
Email ThisBlogThis!Share to TwitterShare to FacebookShare to Pinterest